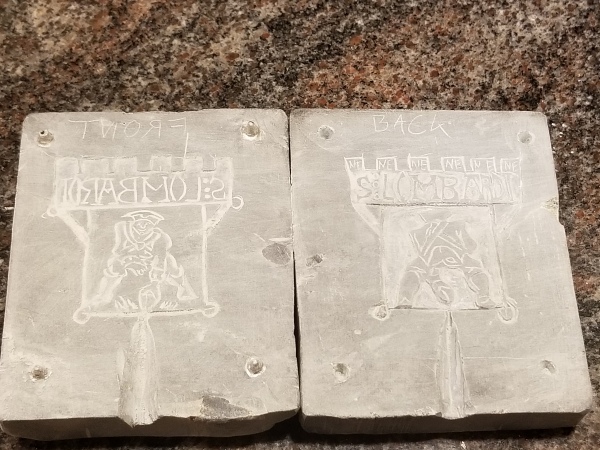 I was asked by Her Highness to make a representation of her favorite athletic team so that she might show her support and pride in their prowess and share in the joy of their victories.

I wanted to make for her an item that was inspired by a reproduction of a 13-14th century pilgrim badge from the shrine of St Leonard at Saint-Leonard-de-Noblat, France. It would keep some aesthetics from the original piece, but incorporate the visage of the sports mascot in place of the image of St. Leonard. (and a few other detail tweaks)

I had inspiration, I had an idea how make it, now came the work of carving. Carving a reverse image into soapstone is not my strongest skill, and the best way to get better is to do it. I decided to challenge myself with this project and not only make this a two sided pilgrim badge, but to make it a reverse image as well.

After the carving came the casting. I used R-98 pewter (98% Tin, 1.5% Bismuth, 0.5% Copper), sourced from Rotometals. I was having issues with thickness and blockage preventing the smooth flow of pewter throughout the entirety of the mold. I created an extra gap in the mold to overcome this issue, but the side effect was an extreme excess of flash around the outside.

That was OK because I also needed practice with the jeweler’s saw. I went about cleaning up the the edges of the badges with saw and hand files, and when it was complete, I added a few little embellishments to add to the spirit of the sport. I antiqued one badge using acid to artificially age the pewter. It gave it a darker hue that more closely matches the current condition of the original badge, and left a second shiny and new. Using the team colors I added some colored metal rings into the loops that would have been used to sew the badge onto a garment and added a chain so that Her Highness could wear the badges easily. The rings can easily be removed to allow for a more permanent attachment at her pleasure.

I added some glass paint to a third badge to grant the full colored version of the mascot.

These were presented to Her Highness on her Birthday at the East Kingdom 12th Night Hosted by Barony of L’ile du Dragon Dormant – Ile Perrot, QC

Pilgrim badge from the shrine of St Leonard at Saint-Leonard-de-Noblat, France. This badge is in shape of a prison tower. St Leonard is depicted listening to the prayers of a manacled prisoner. At the top is an inscription on the battlements of the tower: ‘LEONARDI’. The back is decorated with a cross pattée. There are two circular stitching loops at the bottom, and two angled loops (one missing) at the top which double as supports for the battlements. These loops would have been used to sew the badge onto a pilgrim’s clothes. St Leonard is shown standing on the right, with his right hand raised in a gesture of blessing. A naked prisoner kneels on the left. Manacles hang from the wall above his head.

St Leonard of Noblac was known as a liberator of prisoners and is often shown with fetters or manacles. His shrine at Saint-Leonard-de-Noblat in France was covered in fetters from the many prisoners who had offered them in thanks for their release. It was a popular stopping-off point for pilgrims on their way to the shrine of St James at Santiago de Compostela in Spain. 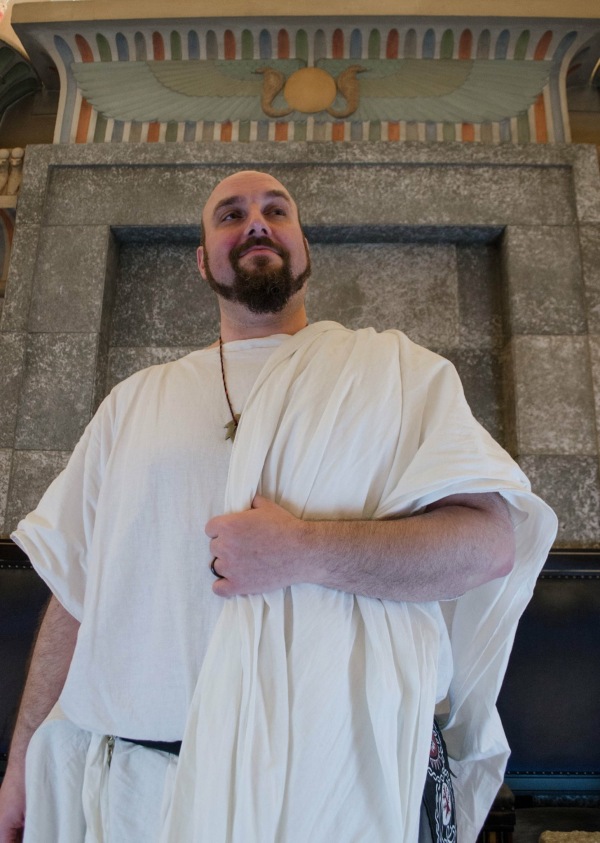 New Blog is a work in progress.  Please be patient while I begin to use this format for some of my projects.

Thanks for coming by!