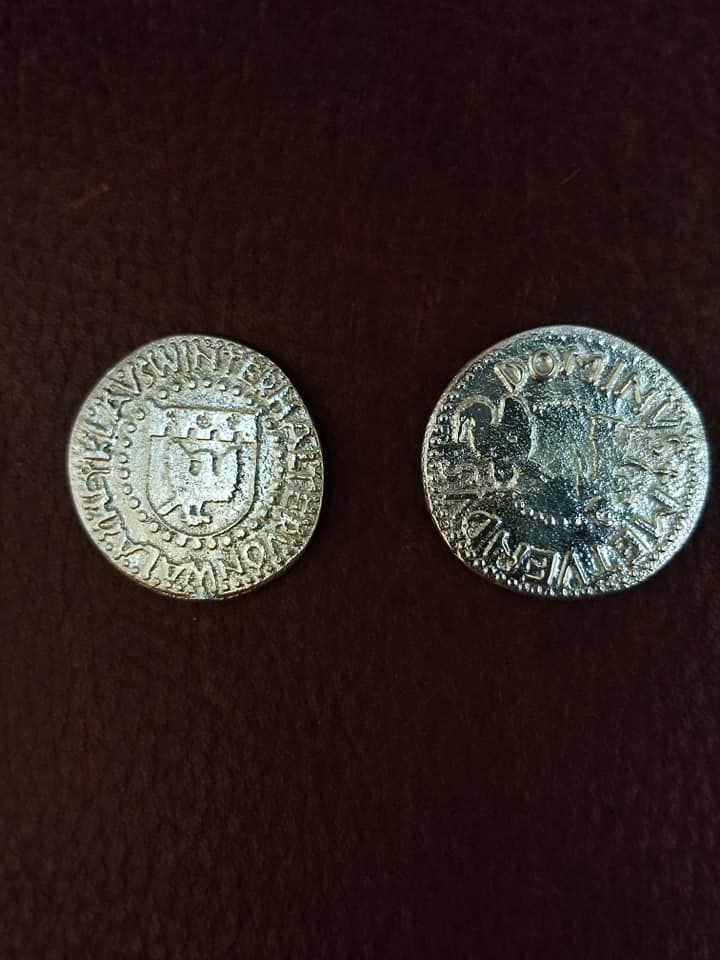 Originally from several Facebook Posts collected here for the blog.

I typically have several projects that I undertake at a time and I bounce back and forth working on different stages of different plans to help keep me unstuck. One of the projects I am currently working on is a commission that I had placed up for auction to help support Their Highness’s reign. The winner, Sir Klaus Winterhalter von Walachey, provided me with some of the artistic aspects that he would like to include, a time period and an enthusiasm for the project. Enthusiasm is infectious, and should never be overlooked. He is excited about it, which makes me excited about it. Which makes me dive right in. So, I have his arms and the badge of his household that he would like to see incorporated into the design, and a rough time period to work in. But I need more! I start looking more into his persona, his period, his geographic region, and interests to help draw into the design. None of this information might be used directly, or even be incorporated into the final design at all, but it provides me with a basis from which to draw. I work best with more data than I could ever use, allowing me to filter out and select what I want.
First thing I start looking into is his personal heraldry. Argent, an eagle rising to sinister regardant, wings displayed, on a chief embattled sable three mullets voided and interlaced within and conjoined to as many annulets argent. Sounds impressive right? I have no idea what most of that means. I am not a herald nor have I ever been drawn into that direction, but I want to get this right. I started looking for images of heraldic eagles, and quickly flew down a pretty deep rabbit hole. (pardon the mix of predator/ prey pun). Do you know how many different representations of an Eagle there could be as a charge?!?! I had no idea and all the different combinations of wing positions and head position and feet positions… It’s all too much for me to coherently impart upon you, but if you are curious, you can go here to learn more about it:

Like This! But I would need to color the design and make the body face right while the head looked left. At least I think this is right, but any heralds more knowledged than I can feel free to chime in and provide additional guidance.

Our next chapter into the process of our coin project; background knowledge. Now that I understood how the eagle should look, I could continue with my design and layout process. To do that I needed to be able to understand what a 15th Century Romanian coin might have looked like, not so much to copy, but more to be able to draw inspiration from. This project is not about recreating an actual historic piece, but rather creating a new artifact that could have been, at least stylistically and aesthetically, possible.

I began by searching for Romanian coins

Finding a deeper dive into Romanian history as it related to the coins used at the time. And I find some amazingly cool resources that are WAY over my head into the details of Romanian history and very detailed information about the currency being used in that region at that time, but they also have what I am wanting to see; images of extant coins from that era.
Ciulavu, F. (2013). The Monetary Reform of Vladislav II of Walachia (1447–1448; 1448–1456). Survey of research. ZIRIDAVA STUDIA ARCHAEOLOGICA, 27, 259-301.
Tataru, C. (2015-2016). MEDIEVAL WALLACHIAN COINS FROM THE SAINT-GEORGES MUSEUM NUMISMATIC COLLECTION. Cercetări numismatice, XXI-XXII, 229-254.

This resource provided not only amazing images of coins throughout the period of the EXACT region I wanted, but also went into very good descriptions of the coins and the history and meaning of the elements on them.  It might seem like a lot, but if you have any interest at all in the coins and heraldry of from Vladislav I Vlaicu to Basarab III Laiota the and the progression thereof their arms and coins, this is a great resource.

Still with me?  Good to hear!

Let’s recap our coin project process so far.  Important elements we want to incorporate, For the Obverse: Arms- (with correct Eagle) CHECK, For the Reverse: charges from the Household Badge (breaking out of the inner circle)- Got it! Dotted borders- no problem.  Inscription- what to write.  Let’s try the standard Name for the obverse and title for the reverse.   Now the 15th century coins mostly had Cyrillic, and only some of the earlier examples used the Latin alphabet, but I do not know Cyrillic, and since this project is not about strict recreation, I stretched it a bit back into the late 14th century and decided to use the Latin alphabet.

So here is where you learn that I do most of my work on computer.  I use Autodesk Sketchbook as my software of choice for the layout design of some of my projects.  Also, this project is going to be a cast coin rather than struck or minted coin, as they all were for this region/period. BUT I have a quite a few tricks to help approximate the look of a struck coin. Struck coins are made by etching or imprinting with punches into dies which are then hammered onto a metal blank imprinting the design onto the coin. I used some resources from the Inter-Kingdom Moneyers Guild, “The Monyers Handbook” by Master Emmerich of Vakkerfjell, which provides a typical set of punches used for medieval designs, and a guide for how some of the more common letters would be constructed from these punch designs.  During this era, a standard set of punches was often used to create many designs and most letters.  Simple shaped punches; lines of varied thickness and length, crescents, triangles would be combined to create letters.  So, I created a set of digital punches and used that for creating the “font” that would be used for the inscription.  I tried to use the guide for the creation of many of the letters, and searched for resources on how others were made, but there was a few letters that I wanted to use that were missing from most sets, so I had to be a little creative and take some artistic license. (Additionally, I wanted the end result to be a readable by modern eyes not used to deciphering these ancient fonts).

Don’t mind the kerning, I still will need to arrange these into a very small circle.

We are starting to make some progress here in the process of designing a token coin for Sir Klaus Winterhalter von Walachey.  Now we can start putting all the pieces together.

Since the extant examples used a coat of arms in a shield template, we will use the same idea and reconfigure the registered arms to fit the style.

Then like with a recipe, we start adding ingredients.  Start with a generous helping of dotted borders.

We have to add the wording

Now the reverse: I wanted to achieve the “breaking the border” look with this to imitate the reverse of the extant example.

The next step is actually bringing this layout creation to life as an actual coin.  Stay tuned for the what the future holds!

Well Hello there amicis mei! It has been far too long since my last update on the wonderful Klaus Koin project.

Since our last post I have taken the layout creation and made it into three-dimensional reality.

The first step is to print the layout onto PNPBlue (press and peel) transfer paper.  This transfers a resist to the coin that will prevent the acid from removing the copper leaving the resist areas raised.

Once the time has been spent in the acid bath, we are left with the copper discs that must then be trimmed and married to form the obverse and reverse sides of the same coin.

Once together we begin to make our mold.  I use as silicone product called MoldMax 60. (www.smooth-on.com/products/mold-max-60/)  It is designed for use with (relatively) high temp materials like molten pewter.  I use a plasticine clay as the base for the mold, capturing one side, then the other creating a two-part mold.

Then comes the clean-up.  Clipping off the pour sprue and the flashing, and filing edges to keep it neat and clean, and remove any sharp or rough edges.

For this project I decided to add an antique patina.  This is achieved by painting on some ferric chloride acid to the pewter coin.  This caused severe oxidation and turns the coins black and dirty.

I then take a fine mesh steel wool and polish off the raised parts of the coin. This creates a bit of contrast and helps make the design really POP!

Tune in soon for the final installment.  Fine silver!

and with that, I have completed the Klaus Koin project! I have cast the final pieces in fine silver. Details came out nicely. All in all, I am quite happy with the results of this project.

I hoped that you have enjoyed following along through the process and that you can continue along in future projects!