This was my entry into the 2018 St. Eligius Arts & Sciences Competition. This was my first entry into an A&S competition and I ended up winning the Novice and the Metal, Glass, Clay, & Wood categories.

“My friends went all the way to the Holy Land, and all I got was this pewter trinket”

Deviations from period: I used pure tin for the ampullae, instead of a tin-lead alloy that would have been most  commonly used for safety reasons. The exclusion of lead made for some minor differences in material properties that were mostly overcome through trial and error experimentation. Period molds would have been either clay or  carved stone. For this project I used a modern silicone which would perform similarly to clay molds, poured or  packed around a carved model, due to the reusability of the mold. The intent was to use as site token for a local  event and destructive mold casting would have been cost, material and time prohibitive.

Likely exact process that would have been employed to create period pieces.

For Malagentia’s Harvest Moon Shoot 2018 ( AS LIII ) I endeavored to create a simulacrum of what a pilgrim  badge might have looked like if it were designed to commemorate the annual pilgrimage to the event. I created a  molded original in the same style, shape and size of extant pieces that have been found. I used wax clay to create  the model. I then used a silicone compound to make the mold. The actual period molds would have been carved  into soapstone or similar material. There are many different types of historical ampullae examples available,  many are either in the shape of a shell, or a semi-sphere, similar to the shape I chose to emulate. The face of my  creation is representative of the Malagentian Moon, with the reverse featuring a wheat sheaf, often associated with  the Harvest of autumn. Many period examples were faced with depictions of saints, or chapels dedicated to them to commemorate and establish a link between the pilgrim and the place of visitation. As with many of the period  examples, I used tin to cast. There was much experimentation done with timing to get the proper thickness of  metal cooled. Too much time and the cooled metal was too thick to pour back out. Too little time and the shell  had not achieved enough structural rigidity to remain intact without the backing of the still molten materials. I  created enough of these full ampullae to be given to the staff of the Harvest Moon event, but due to time  constraints and material costs, I created a modified mold to create a half ampulla site token to be distributed to the  attendees of the event.

A pilgrimage to holy sites has been a tradition dating back to the fourth century. During that time it was  important to visit the sites of holy events, or saints’ final resting places in order to feel a closer connection to the  Divine. Often a church was erected upon such a holy place. At the site were sold souvenirs to pilgrims. This was  part profiteering and part preservation. If every pilgrim took a piece of the church or a piece of the artifact, there  eventually would no longer be anything remaining to visit. The church administrators often sanctioned  individuals to create these tokens that could be sold to pilgrims. Ampullae were often filled with blessed water

from the source, or that had been in contact with an artifact. They could also be filled with holy oils, and because  the metals used were soft, such as tin or lead, they could easily be crimped to seal the contents.

Pilgrim souvenirs were intended to be attractive from a distance and recognizable close up. Their buyers could  adorn their hats or bags with a distinctive icon or logo and proceed home, advertising where they had been and  their status as a pilgrim, which, it was hoped, would bring them safe passage. Most major pilgrimage sites had at  least one, easily recognizable image that could be reproduced on the surface of a lead alloy badge. Santiago de  Compostela had a shell; Amiens had John the Baptist’s head on a plate; St Albans had an image of the saint’s  martyrdom (Jeffs, 2017)

Guided by the belief that physical contact with holy matter would result in the transfer of its  miraculous properties, Christian pilgrims to the Holy Land not only desired to touch and kiss  objects associated with Christ’s Passion at sites such as Mount Golgotha and Mount Sion; they also  sought to preserve and carry home with them substances that could claim some physical contact or  proximity to the sites and objects they had seen and venerated. Frequently referred to  as eulogiai (blessings) in contemporary pilgrim accounts, such substances often included wax from  candles or fragrant oil from lamps that burned at shrines or tombs of holy martyrs. Depending on  the pilgrim’s financial resources, these substances could be collected, brought into contact with  important relics such as the True Cross, and eventually carried away in small portable ampullae of  terracotta, lead, and presumably also more precious materials such as silver, offered for sale.  (Klein)

Pilgrims to Canterbury could commemorate their visit by purchasing from a wide range of souvenirs. A popular  12th and 13th century item was a small lead phial called an ampulla which the pilgrim would then fill with ‘St  Thomas’ Water’ from a basin in the cathedral crypt. The ‘water’ was initially believed to be a homeopathic dilution  of Thomas Becket’s blood which could be taken as a drink or applied as a lotion to the sick, and was reputed to  effect miracles ranging from leprosy, blindness, and tapeworms, to fighting a house fire. Miracle-working blood

was theologically dubious, however, and brought up worrying parallels with the Eucharist, so the monks of  Canterbury appear to have insisted over time that the water was merely water blessed by its association with St  Thomas. The visiting public clearly felt less enthusiasm for the bloodless liquid, and numbers of ampullae decline  from the end of the 13th century. (Jenkins, 2015)

*Please note: Inspiration descriptions are verbatim from websites where the examples were sourced and are intended to share knowledge, and are not intended to be represented as my work, analysis, or writings. Whenever possible links are included to the source works. 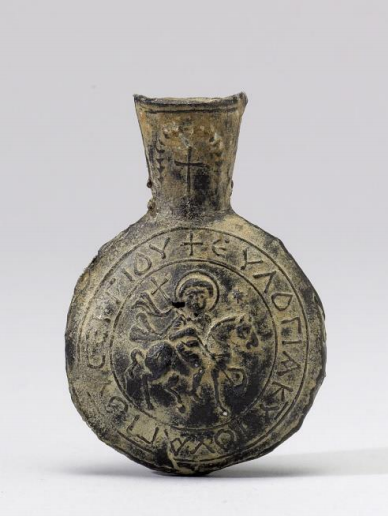 This rare and beautifully preserved flask is one of the first to depict St. Sergios on horseback, surrounded by the inscription: “Blessing of the Lord of Saint Sergios.” The cult of this 3rd-century saint reached its height of popularity in the 6th century, at the site of his martyrdom in Sergiopolis (in northern Syria). Similar style of other 6th century pilgrim ampullae from the shrine of Saint Sergios in Syria. Resafa, known in the Byzantine era as Sergiopolis and briefly as Anastasiopolis, was a city located in the Roman province of Euphratensis, in modern-day Syria. It is an archaeological site situated southwest of the city of Raqqa and the  Euphrates – currently on display at Walters Art Museum 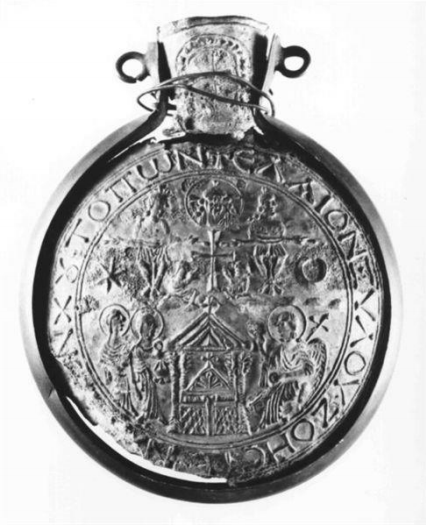 Ampoules of Bobbio, representation of the Holy Sepulchre
Period: 6th century
Original Source: Basilica of the Holy Sepulchre, Jerusalem
Found: Bobbio Abbey, Italy
Dimensions: A diameter for the main body of about 5–7 cm is typical, and in a side view the body swells to a maximum thickness of about 3 cm. Often there is a strip in a different metal running round the edge of the faces and up the sides of the neck, with little rings for a suspension cord. In this example these strips are secured by wire wound rather untidily round the neck.
https://en.wikipedia.org/wiki/Monza_ampullae 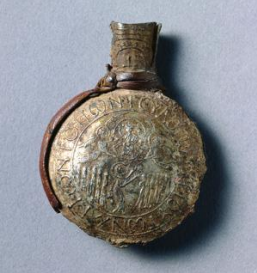 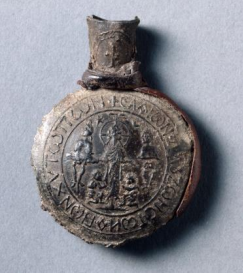 This lead ampulla, or flask, is decorated on both sides with images of central events from the life of  Christ, namely, the Crucifixion and the Ascension. The inscriptions surrounding these images  reveal that the flask once contained “oil of the wood of life,” namely, oil that had been brought into  contact with the relic of the True Cross. 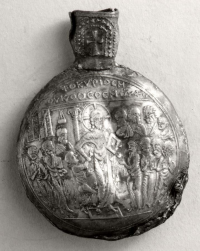 Description: Ampulla; on one side an angel with the two Mary’s

at the Sepulchre; above the tomb an inscription; below, a floral

motif flanked by two birds; around the edge of the ampulla in a

circular border another inscription; on the other side the

incredulity of St Thomas and an inscription.

Original sculpt to be molded 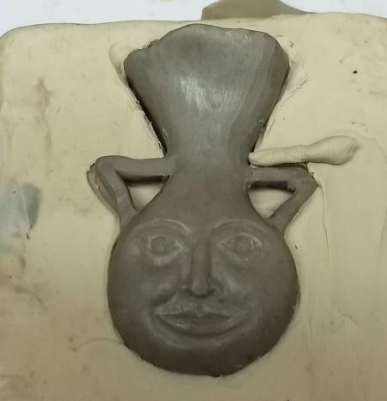 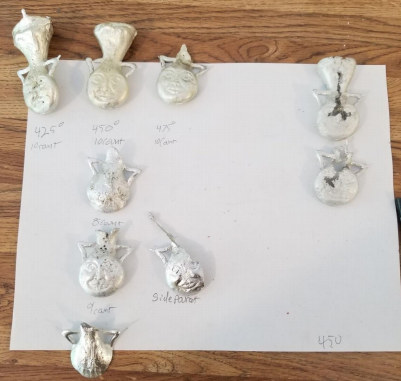 Detailed view of time/temp tests( Front and Back)

Changed from pewter to tin and observed improved results

Garcia, M. (2003). Medieval Medicine, Magic, and Water: The dilemma of deliberate deposition of.  Peregrinations: International Society for the Study of Pilgrimage Art.

Slush Casting is a method of casting using a standard, basic, and traditional mold that is used to create and  produce a hollow part. Items made in this fashion can yield inconsistent results due to the variability and lack of  control inherent in the process. This method to produce hollow subjects is typical for decorative items due to the  lack of structural stability.

First prepare a two-part casting mold. Carved from hard block (e.g. soapstone alabaster), or created from clay  around a positive model. This yields a voided area that would be filled with molten metal and solidify filling the  void.

Once the mold is prepared, it is filled with molten metal per usual casting process. The basic principle of the  slush casting requires that the molten metal begins cooling from areas in contact with the mold wall first,  solidifying from the outside towards the center. As it cool, the thickness of the “metal skin” increases. The metal  skin creates a shell against the mold wall capturing the details of the mold subject as the molten metal crystalizes  and creates a solid structure.

The mold is then inverted to pour the still molten metal out from the center void before it can completely cool and  solidify. This will leave behind the cooled outer shell that has had contact with the mold, while vacating the  center of the void. The longer the molten metal remains in the mold, the thicker the solidified metal walls  become.

Once the molten metal is removed and the metal shell is allowed to completely cool and solidify, it can be  removed from the mold. The resultant casting is a hollow, metal shell of the original design subject. A hollow  cast would be much lighter and save on materials compared to a solid casting.

Some limitation of slush casting is that it can only be done with lower melting temperature materials; pewter,  lead, tin. The same basic design constraints as normal basic casting still apply (no undercuts, etc…). It is  difficult to control the rate at which the metal cools and variations in thickness can and will occur as a result.